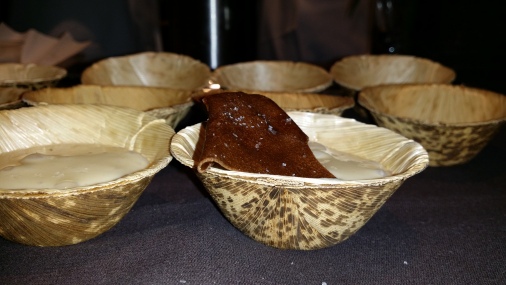 Back with the brewski of the week . In the past month and a half, I’ve attended two major beer events in New York. I was able to slip some freebies to bring home and review.  My first beer I had the pleasure to slip and sip is the Elysian Space Dust IPA. Elysian is a brewery out of Washington state . It pours a nice golden color and has a nice citrus – hoppy aroma. The ABV is 7.2.  Its a smooth  and enjoyable IPA.  Grab it, if you find it at your local bodega.

Last week, I attended an extraordinary culinary experience at Basketball City. The event was put together by one of the finest charitable organizations in the city. Although I had to use some old-school Brooklyn style tactics to get in, the event was one for the books. With over 70 restaurants participating, it was wall to wall of delightful bites. The venue also was set up with a dessert bar, an auction, a few mixologist, a scotch whiskey station and a cigar corner. Not only it was a fun event but the charity raised over a million dollars to help feed hunger. PINKYFINGERUP

SPICE-BRAISED SHORT RIB with BEEF HEART with COCONUT and FLATBREAD